Nicolette Devas studied at the Slade in London, where she met her future husband the artist Anthony Devas Nicolette painted under the name Nicolette Macnamara, where she achieved considerable success painting mainly landscapes in watercolour and oils, indeed she was arguably more successful at first than her husband. The war and the pressures of bringing up young children seem to have been responsible for the switch to writing, with her autobiographical ‘Two Flamboyant Fathers’ achieving particular success. She also gave talks on the BBC. Nicolette was the daughter of Francis Macnamara, one of her sisters, Caitlin, was married to the poet Dylan Thomas. Following the death of Anthony in 1958, Nicolette remarried the artist Rupert Shephard, a fellow student at the Slade.

Nicolette Macnamara painted mainly birds and landscapes, usually in watercolour. She enjoyed considerable success, exhibiting at the New English Art Club, the Royal Academy and the London Group, but her painting lapsed as the demands of family life and children multiplied.

Sally Hunter Fine Art 1987: Nicolette Devas with three friends from the Slade. 66 watercolours by Nicolette Macnamara Devas, mainly birds and scenes from the New Forest, all painted in her youth. The exhibition was a sell-out 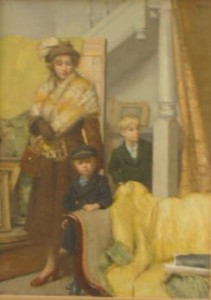 Nicolette with her sons Esmond and Prosper in her husband’s painting ‘Visitors to the Studio’, about 1952

Bonfire: her first novel, which was published by Chatto and Windus in 1958, shortly before the death of her husband. It achieved a critical success, and the film rights were later purchased. The plot revolved around the destructive impact of the intrusion of an outsider into an established and happy family, a theme that was also explored in her last novel Pegeen Crybaby, and which echoes events in her own childhood described in Two Flamboyant Fathers.

Nightwatch: published by Chatto and Windus in 1961, a strong tale of fakes, dealing , and related skullduggery in the London art world which Nicolette knew so well, in all its aspects

Two Flamboyant Fathers: published in 1966 by Collins to much critical and popular acclaim, this classic autobiography describes her eccentric childhood in the West of Ireland, and the bohemian England of the Augustus John entourage

Nicolette with her sons Esmond and Prosper in her husband’s painting ‘Visitors to the Studio’, about 1952

Black Eggs: published in 1970 by Collins, the story line reflects her lifelong passion for birdwatching, backed by insights into egg collectors gained working at the Natural History Museum, and encounters with twitchers and other obsessive birdwatchers in her travels with the ornithologist and naturalist James Fisher

Susannah’s Nightingales: published in 1978 by Collins, this was a follow up to Two Flamboyant Fathers. It tracks the strange Irish French axis of her maternal family in the South of France, who helped to establish the Quakers in France. This autobiographical book attracted little attention on publication, but according to Public Lending Rights figures is now more popular in UK libraries than Two Flamboyant Fathers, possibly due to the growth of tourism to Southern France, and the book’s relevance to continuing protestant influences in Provence and the Languedoc.

Pegeen Crybaby: published by her son Esmond’s Gronow Press in 1986, this is a rip roaring tale of love, promiscuity, academic jealousy and vengeance. Set in the South of France, the novel was intended to be, she said, a sex and violence money spinner. It didn’t quite work out that way despite the liberal use of swear words and some steamy sessions, but it remains an excellent read, despite the illustrations.