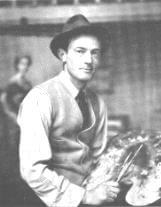 Anthony Devas studied at the Slade in London, where he met his future wife the artist and writer Nicolette (Macnamara) Devas. Anthony Devas went on to become an extremely succesful artist. Best known for portrait commissions, his ability to capture children was particularly noted. He was also a passionate and prolific painter of flowers, and a keen gardener who won the annual Chelsea ‘best window boxes’ competition on a number of occasions. A gregarious and popular person and a committed member of the Chelsea Arts Club, he wrote regularly in the press on the arts scene, particularly as it affected jobbing artists like himself. Although associated with the Euston Road Group, he was never really very interested in artistic isms, and always managed to earn enough through direct sales and commissions to be able to avoid the involvement in art teaching and the arts schools which debilitated so many of his contemporaries.

Anthony Devas held one man shows at the Cooling Gallery, Wildenstein’s, Agnew’s, and the Leicester Galleries, as well as participating in numerous mixed exhibitions. From the early 1940s he was also a regular exhibitor at the Royal Academy, to which he was elected in 1953.

He died in 1958 at the young age of 47 following a number of years of ill health.

Cooling Gallery 1936: One man show, landscapes and portraits in oils. This exhibition enjoyed a critical and popular success, and marks the emergence of Anthony Devas as an established painter, both of landscapes and of portraits. Click to see list of exhibits

Chantrey Bequest: Purchase in 1939 of ‘The Artist’s Grandmother’ by Anthony Devas 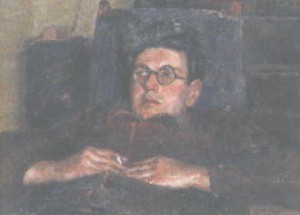 Six O’Clock News 1940, first exhibited at the National Gallery in 1942, the catalogue to the 1998 touring exhibition Head First noted that this picture was briefly famous for its encapsulation of the national mood #A41

Six O’Clock News 1940, first exhibited at the National Gallery in 1942, the catalogue to the 1998 touring exhibition Head First noted that this picture was briefly famous for its encapsulation of the national mood #A41

Civil Defence Artists’ Exhibition 1942 at the Berner Street Jewish Settlement: Included works by C R W Nevinson; Kenneth Steel; Arthur Hickman-Smith; and a picture called Pansies and Sorrel by Anthony Devas, which was purchased by the Queen when she visited the exhibition. Anthony Devas served as Fire Guard and Air Raid Warden in Chelsea during the war 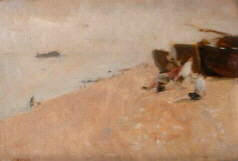 Leicester Galleries 1942: Exhibition of works by: Graham Bell; Thomas Carr; Lawrence Gowing; and Anthony Devas, all of them associated with the work of the Euston Road group. Devas exhibited paintings entitled Mother and Daughter, and The New Baby, together with a selection of portraits including Mrs Dylan Thomas 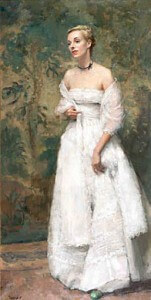 1946 Teaching part time at the Slade School of Art

Royal Academy Summer Exhibitions : regular exhibitor from 1940 onwards, often including conversation pieces such as Laurie Lee and the Children; Finishing Touches in 1949 (Nanny Robinson adjusting the wedding dress); Visitors to the Studio in 1951; at the Couturier in 1955 (Margaret Philipps) Click to see full list of paintings exhited at RA Summer Exhibitions 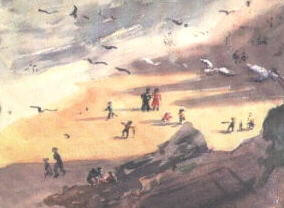 Tenby Museum 1992 : ‘Anthony Devas, family and friends in Tenby 1945-1955’ Family holidays were taken in Tenby in South Wales, accompanied by many artist and writer friends. These long working holidays are well documented through many paintings and other material, and were celebrated in this exhibition Click to see full list of exhibits

Two Flamboyant Fathers, by Nicolette Devas, published by Chatto and Windus in 1961

The Townsend Journals- an artist’s record of his times 1928-1951, extracts of the journals of William Townsend, published by Tate Gallery 1976

The Bohemians- the glamorous outcasts, by Elizabeth Wilson, I B Tauris, 2000

‘The plot to save the artists’, by Lionel Esher, Times Literary Supplement, January 2 1987 [ a curious plan hatched during the phoney war period of 1939 to save ‘promising artists and writers of military age’ from the expected total destruction ]