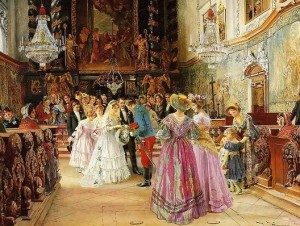 Renaissance wedding ceremonies were very unique. Many tend to think they were more a civil wedding than a church wedding.

Here are some of the features that makes this ceremony unique and interesting:

This symbolized the tying of the knot. The held each other hand and then a cloak was tied to their hands. In other places it was symbolized by cutting a lock of hair of both the partners and tying a knot, or also drinking out from same cup.

Flowers on their heads

Brides preferred wearing a woven flower around their head. They always matched the flowers to the dresses they wore. It symbolized fertility.

Guest usually brought smalls cakes which they were piled together and if the couple would be able to kiss on top of the cakes without knocking them down, it meant good luck to their marriage.

After the celebration they used to throw rice on the wedding couple.
This was good luck because it symbolized fertility.

The Italian renaissance wedding had 4 different stages. It included impalmamento, sponsalia, matrimonium, nozze. These occasions were widely spread and could take even years to be completed.

The first stage was impalmamento which was the handshake earlier mentioned that sealed the wedding. This was actually the first time that both families met, before this they used a neutral intermediate to coordinate the negotiation. It was not necessary on the money negotiation but as time passed money became compulsory.

After the negotiation, the bride groom would go to the family house and brought presents with him. They would take him in and offer him dinner. The bride would meet the groom at the window, it symbolized marriage declaration. She needed to be well dressed and very attractive. She had to catch the man attention, this was concluded as the groom consent. They could only speak to each other and give each other presents privately.

Sponsalia was the second stage. This was a public meeting among male members. It was meant to ensure that each family would keep their specific promises. This included the dowry. The dowry quantity determined the bride wealth. If it was an upward movement of social class for the bride and the family, the dowry was higher. This was to decrease the wealth gap between the groom and bride families. In this stage there was need of the bride’s consent after that anyone who was against their marriage could cause even war.

The matrimonium stage was also known as the ring day. The couple were well dressed and stole the spotlight. They invited all their family members and exchanged vows in a church. After they said I do, they would exchange their wedding rings. There was feasting after the exchanged vows. After this stage the groom could give the bride some presents which included jewelry.

The last stage was nozze. This was more of publicizing their wedding. The bride who was lavishly dresses could ride on a white horse with the new households to the new house, when the groom saw the bride they would celebrate in honor of her joining her husband.